Let me tell you about Sara Viti.


First of all, I don't know her, but we made contact via Goodreads. For those who don't know, Goodreads is a reading and writing community with more than  nine-million members world wide. Any budding authors really ought to join - most of the early reviews for Pike's Quest emanated from the Goodreads community.


Up until now my reviewers have, in the main, been on the upper side of thirty-years old (in some cases I am generously underestimating, here!). Nothing wrong there ... I have broad appeal and I am on the other side of fifty, myself. However, when I was hawking Pike around literary agencies and publishers, they were advising me that the book was clearly in the Young Adult arena, so where were my younger readers? Well, that's where Sara came in.


Sara Viti is a book reviewer and blogger. I am a writer ... you can see where this is headed.


Pike is just coming out in paperback, having spent the last eight months in e-book format. I have a few publicity things up my sleeve, but I wanted someone in the supposed age group of the book's main audience to have look and give me an honest opinion. I e-mailed Sara and asked her if she would like to review Pike Quest.


"I can send you a free e-book copy," I offered, realising that this was a cheap option.


"I'd prefer it on paper," she replied, increasing my expenditure.


I cringed, but after seeing her website I really wanted Sara to review Pike.


I had one copy. It was my proof version with an awful cover and pencil marks all over the pages where I had hurriedly scrawlled some corrections. Actually, I hadn't even finished correcting it, but I had already ordered a new proof with a new cover. Reluctantly, and with a warning of "It's got pencil marks all  over the place and the cover is rubbish" I wandered off to the post office and spent a considerable sum in postage.


I need to point out at this juncture that I live in England. Sara lives in Italy - Rome - and my God, postage is expensive. AND, following a recent Achilles tendon reconstruction, I had to almost hop to the post office, as I am still using crutches. Suffer for my art, me?


Anyway, getting to the point at last, it was worth the effort. Sara is, perhaps, the most perceptive reviewer to have read Pike's Quest. This is highly apparent when you read what she thought of the book. She picked up on some (good) things that no other reviewer so far has. For instance:, a recent reviewer on Amazon gave me my first poor review. I'm not offended: most of what the reviewer said was fair comment. Pike isn't everyone's cup of tea and she is entitled to have an opinion (and she said my writing was good). However, that reviewer complained about a lack of character development. I didn't understand what was meant by that: my characters drive the story and they develop quite nicely, but not in an 'in your face, I'm going to write reams of innermost thoughts and bore you with my pain: woe is me!' sort of way. Sara picked up on this in her review:

"I noticed, during the reading, that for the first time there was not a depth descriptions of the characters, of their passions or feelings toward other people, but I felt like it was not necessary. In other books there are often entire chapters dedicated to a particular character or to the protagonist; in Pike's Quest this is not present: the author succeeded in revealing the characters' features, only by describing their behaviours during certain situations, the way they reacted in front of difficulties. As for Pike, I can't remember a chapter in which he was widely described, even if he was the protagonist. By the way, I feel like I know him.”

Later in the review, Sara also got to the nub of what the book is really about: power, greed and corruption. She quotes from the book to reinforce her realisation.


So, not only does Sara live in Italy, she is Italian and English is a second language (maybe a third, but certainly not her first). She is one highly talented reviewer who, in addition to her book reading, blogging and reviewing, holds down two jobs. I may be wrong, but I think she may also still be studying.


After reading Pike, Sara invited me to do a guest post on her blog. She also persuaded me to part with yet more money by way of offering a FREE PAPERBACK copy of Pike's Quest for a give-away on her site.


The review, guest post and give-away can be found here - http://sarainbooklandblog.blogspot.co.uk/2012/07/review-pikes-quest-guest-post-giveway.html


To my fellow writers who may be working in the YA arena, I urge you to consider Sara Viti as a top rate reviewer. Her enthusiasm for reading, the English language and hard work is humbling.

Indie Book of the Day 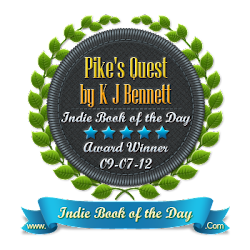 This is one of my blogs - the other is HERE. I confess: I am bi-blogual. My main site is kjbennett.co.uk 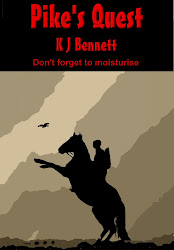